On Sunday August 19th, Citromax SACI, the only US owned Lemon Company in Argentina, was honored to host The Honorable Edward C. Prado, US Ambassador to the Argentine Republic.   Ambassador Prado accompanied by Mrs. Prado and several attachés, joined Tucuman Governor Juan Luis Manzur and member of his administration for a private lunch, tour of the factory and visit to the orchards. 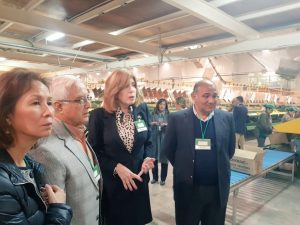 Citromax, a Women Minority owned business is proud to mark 2018 as the first time in 17 years that Argentina grown fresh fruit is allowed in the USA, and our packing house is one of the few certified to pack for the US market.

Nominated by President Trump, Ambassador Prado is a distinguished Federal jurist, having served as a United States judge for almost 35 years. He was confirmed by the Senate on March 22, 2018 and officially submitted his credentials to Argentina’s President Mauricio Macri on May 15th at the Olivos presidential residence, becoming the 56th U.S. Ambassador to Argentina.